It is not unusual for the patient to present for a consultation at the oral surgeon’s office and be informed at some point in the discussion that he or she may require a “bone graft” in order to maximize the outcome of dental implant surgery. While this sounds pretty scary at first, the truth is that bone grafting in the oral cavity today is a routine, predictable and painless procedure.

A Brief History of Bone Grafting: As recent ago as the 1970′s and 80′s, before the renaissance of “dental implants”, much of pre-prosthetic oral surgery was aimed at simply building a stable base for a denture in patients who had experienced severe atrophy of their jaws. Many of our readers may identify with this when remembering a mother, father, aunt or uncle who, at an earlier age, had lost his or her teeth and were now wearing dentures. 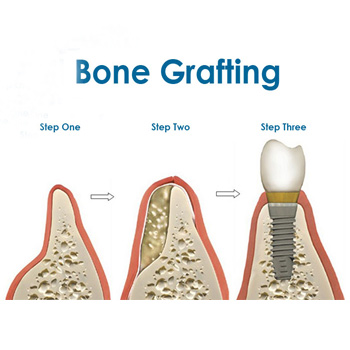 While the need for bone grafting has been significantly reduced, it has not been eliminated entirely. However, in most cases it is now relegated to small minimally invasive interventions that can be managed quite easily in an ambulatory (office) setting. Furthermore, while bone grafting of earlier years involved harvesting and using large quantities of the patient’s own bone (autogenous grafts), today we can often use processed bone that has been harvested from animals (i.e., cows). These grafts are termed xenografts and are generally comprised only of the mineral content of natural bone, have been sterilized and have had all organic material removed. Using bovine bone (cow bone) as a graft material has become commonplace in most oral surgical offices today and has been a tried and proven technique for many years. A simplified explanation for the success of this form of grafting is that a bovine bone graft is placed to act as a “biological placeholder.” Initially, it mechanically prevents the collapse of the surrounding tissues, whether that is bone or soft tissue. Then, through a process called “guided tissue regeneration,” the human body is fooled biochemically to recognize the graft as natural bone and over time resorbs and replaces it with the patient’s own native bone.